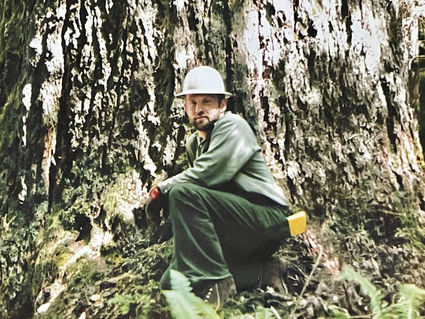 Ken’s story begins on June 14, 1939 near the orange groves of Redland, Calif.

Shortly after he was born, his father Carl and wife Gladys moved their family of nine children to a modest farm in Holley, Ore.

As the youngest of nine children, Ken lived the country life, raising pigs, chickens and cattle with seasonal gardens and orchard harvests to maintain the large family. His father died when he was 10 and this is when his life of accepting responsibility of, and caring for others began.

Ken married the love of his life, Barbara Ann Wood, at 18 and by age 22, they had three children, Mark, Lorie and Lisa.

He relocated in 1959 to Taft, Ore. (Lincoln City), where his brother-in-law, Wayne Bryant, taught him how to fall timber. Wayne (married to sister Roberta) served as a surrogate father to Ken and both he and Roberta provided examples and guidance of how to be a stable, loving, spiritual family.

After eight years on the coast, Ken moved his family to Sweet Home. He bought his mother’s house and moved Gladys next door to care for her.

In 1970, his brother-in-law Rob Wood, age 15, moved in permanently with the family, as he needed a solid home to live in.

Faith in God was Ken’s cornerstone, and Rob grew into a great young man and then a minister. This was another example of Ken’s selflessness and care for others.

Through the years, Barbara stayed home with the four kids and Ken was the breadwinner. He felled timber for local companies, including a couple of his own. While raising the kids, Barbara also began working in real estate. She did so well she started her own company, Holley Real Estate.

At age 48 Ken was injured and needed to get out of the logging business. It was only natural that with his gift of gab, and Barb’s head for business, that he join her in the real estate business. Therefore, Ken studied hard and got his real estate license.

They worked together for many years, until 1996.

In 1996 Barb had a stroke and they both retired. Ken then became a full-time care-giver to his soul mate. They bought a motorhome and traveled and spent winters in Yuma, Ariz. They enjoyed 19 years of this until Barb died and went to heaven in 2015.

Ken had Parkinson’s, but still was able to stay in his home and enjoy his family and friends for several more years.

He finally was released from his suffering last month, Dec. 19, 2020, to join his sweetheart in heaven.

The world is a different place without Ken in it. He lived life to the fullest and gave all of himself to his family and friends.

He loved hunting, fishing, woodworking and keeping up his small farm. He made everyone around him feel special and he will be greatly missed.

He is survived by his sister, Roberta; brother Paul; son Mark; daughters Laurel Turner, and Lisa Legg and her husband Jack; grandchildren Keegan and Abram Legg; and brother-in-law Rob Wood and his wife Carol.

There will be a private burial for the immediate family. A celebration of life will be held in June. Family will announce the exact place and date in March or April, when it can be confirmed.