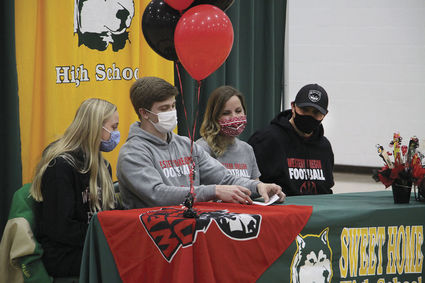 AIDEN TYLER signs a letter of intent to play for Western Oregon as his family, sister Chloe, left, and parents Rachel and Nick, right, share the moment.

With his family – parents Nick and Rachel Tyler, and sister Chloe looking on, Aiden Tyler became the sixth Husky athlete from this year's senior class to sign to play at the college level. In signing with Western, he follows Bailee Hartsook, also his longtime girlfriend, who signed in November to play volleyball for the Wolves.

He is the second football player in the past several years to move to the college level; Keegan Holly is a junior at Lewis and Clark a...