SH's new representative getting up to speed 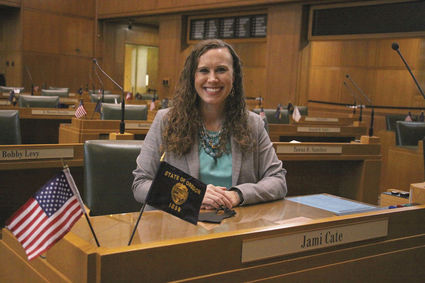 NEW REP. JAMI CATE sits at her desk in the Oregon House chambers.

State Rep. Jami Cate welcomes a visitor to her new office in the House wing of the Oregon State Capitol.

The Capitol building is largely empty, except for a few people huddled in a meeting in corner of the lobby, and an occasional staffer visible in an office.

Legislators are meeting in committees, but they're remote meetings. There are no more House Chamber meetings this week, so Cate is meeting with constituents and legislative colleagues today. Later she has a meeting of the House Committee On Agriculture and Natural Resources, of which she's a member.

Cate, who was elected to the position vacated by Sherrie Sprenger, who is now a member of the Linn County Board of Commissioners, has been working on getting up to speed in the legislature, which convened Jan. 19 and is scheduled to run through June 28.

She's been working on "just trying to get that base level of understanding of what's going on and how things function," she said.

"Everyone says 'You know, being a freshman in the legislature is just awful, and then we add COVID on top of it.'

"It's an adventure, for sure, but I'm really happy with my committee assignments."

She's vice chair of the House Committee on Economic Recovery and Prosperity, which is working on a long list of bills, and in addition to Ag and Natural Resources, she's a member of the House Special Committee On Wildfire Recovery.

She has help from her legislative director, Jessica Snook, who's worked in a variety of roles in the legislature since 2017, including a stint in another representative's office.

Cate's excited to be working on economic recovery and forestry issues, she said.

"I'm really more of one who thinks it doesn't matter whose idea it is originally, that you can work collaboratively and really just make the best bill possible," she said. "That's what committee work is about. I think there's so many people that have great ideas, that you can really throw your all into just making them the best possible, and so I'm really excited about the committee work, just targeting recovery, both economically after COVID, but also the wildfires."

Shifting her attention from Lebanon to the Capitol has been a challenge, Cate said.

"I think shifting from, again being so community-oriented where you know everyone's on the same team, to this idea that everything's kind of strategy between two different teams, it's really sad to me in some ways.

"I would love to see more bipartisanship in our legislature. And I think there's that growing frustration on both sides, that we need to start getting back to the brass tacks of what do we need to be doing and not so much of the contentious extreme political agendas."

The coronavirus, Cate believes, has lessened the "contentiousness" in the Capitol, she said.

"I think one of the silver linings is that COVID has really brought the humanity back to people, that they love to just visit with people; they've been so deprived of human interaction.

"I think right now everyone is just excited and welcoming . I'm sure that will kind of change as some contentious issues come up, but right now I think everyone is muddling through the virtual-ness together and it provides lots of opportunities to kind of come alongside each other and share experiences. There is a lot of a lot of fun and collaboration and being a human being.

"So that has been nice to see. I wasn't expecting that."

She said that the reality is that legislators cannot address all the bills that have been submitted for review.

She and others know they "need to be very choosy about what what we are hearing and what we are investing our energy and our time into this session, especially with virtual slowing everything down," she said.

That's why she wants to focus on "critical needs at hand" and steer clear of "extreme political agendas."

"And that has been a sentiment I've heard repeatedly from from Democratic colleagues, so I hope it's a broad-reaching sentiment."

One big issue that has slipped from the spotlight during the coronavirus response has been redistricting, the once-a-decade process of drawing new district maps under the Oregon Constitution and state laws. Lawmakers are facing a July 1 deadline for creating new maps.

Census data will not be available until July 30, which means the process would go to Secretary of State Shemia Fagan and the Oregon Supreme Court for state legislature districts, and a panel of judges for congressional districts.

"I think everyone's hope is to do it in the legislature but it's going to come down to the courts are going to have to decide what happens because we're in a very unprecedented situation."

She's also focusing on rural wifi needs, something she's familiar with personally as a resident of rural Lebanon.

"One of the things that we've been talking about quite a bit here recently is expanding broadband and the needs with telehealth and the needs with virtual school and preparedness for moving forward," Cate said. "It's also, from an economic development standpoint, giving more opportunities to our rural communities for business ventures."

A major focus for her is economic recovery from the wildfires.

"I'm again fortunate that I get to work on those things with my committee work; so that that really was my focus because I think those are the most critical needs," she said.

"I would love to have our whole economy just reopened, our schools open and everyone back to some semblance of normal, but again that's really, unfortunately, up to the governor right now under executive orders. We don't really have much choice on weighing in on that. But I think it's still doing what I can from my position to at least mitigate some of some of the horrible suffering that's been happening."

Nothing's free, though, she noted.

"I think there's so many issues that people are aware of but also the amount of funding that's available is very limited and most wonderful ideas come with a price tag. And that is it where the most critical need is right now, for funds.

"You know, this pandemic has taught us a lot. And again, being prepared for that, moving forward on how to make sure that people are going to safely have access to health care, but also again just trying to recover after wildfires.

"I'm hoping we stay busy enough with those critical needs again to offset some of the more contentious issues." 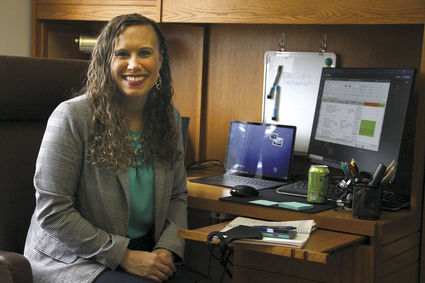 JAMI CATE sits in her office, where she meets with constituents and other legislators, often online, as she launches her career as a legislator.