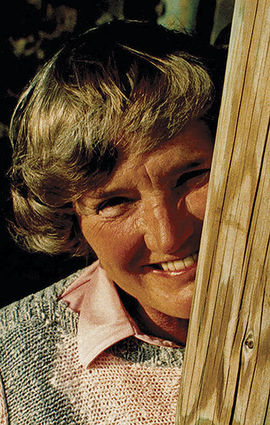 Laura Margaret Morse, a longtime resident of Corvallis, passed away peacefully on February 3 at the age of 95 at Willamette Springs Memory Care in Corvallis.

Laura was born in Junction City, Ore., the third eldest of Edgar and Nettie Moffit Kelso’s five children. She graduated from Junction City high school in 1943.

It was during her senior year of high school that she had a disagreement with one of her teachers and she quit school. She was working at the movie theatre in Junction City where she met her future husband Forrest Morse, but he said he would not marry her until she finished school. So she patched things up and was able to graduate with her class.

Her spunkiness served her well throughout her life.

Her husband Forrest, along with brothers Joe and Bill, were the founders of Morse Bros. Inc., which eventually grew to be the largest construction company in Oregon. They sold to Knife River in 1998.

Laura enjoyed many sports throughout her life. She would join Forrest on fly fishing trips to Montana or Quesnel Lake in British Columbia where the family continues to keep a cabin.

She also liked to go salmon fishing and crabbing out of Newport or Astoria with family and friends.

But her real passion was for golf. She and Forrest bought a home in Borrego Springs, Calif., in 1980 and began to spend winters there. She became a club champion of the Borrego DeAnza Country Club a number of times.

They made many new friends and enjoyed many outings in the Borrego DeAnza desert with them. A highlight was always the spring bloom of the desert.

Laura was preceded in death by all of her siblings, Basil, Wally, Edgar, and Jenavive, as well as her daughter Jody in 1976 and her husband Forrest in 2011.

She is survived by her sons and daughters-in-law, Mike Morse and Tari, and Steve Morse and Jackie, both of Corvallis, six grandchildren and nine great-grandchildren.

A graveside service with immediate family in attendance was held Feb. 6 at the Lebanon I.O.O.F. Cemetery.

Memorial contributions can be made to the ARC of Benton County or the Harrisburg Area Museum in care of Huston-Jost Funeral Home 86 W. Grant St. Lebanon, OR 97355.