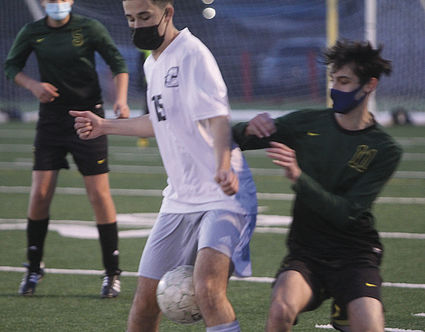 MASON LOPEZ, right, jostles with Cascade's Brooks Rasmussen for the ball during the Huskies' opener against Cascade Wednesday, March 3.

Sweet Home's boys soccer squad lost to Cascade 4-0 in their opening match at Husky Field, but Head Coach Eric Stutzer took away some positives from the contest.

"I saw a lot of improvement from last year," he said. "One of the things we really struggled with last year was movement and making runs. So a huge improvement in our first game was our level of movement."

Stutzer said he has a statistician who has been marking out the team's movement in matches for almost two years now, and "this was one of the better mapped games that I've seen."

"They were really utilizing the entirety of the fie...