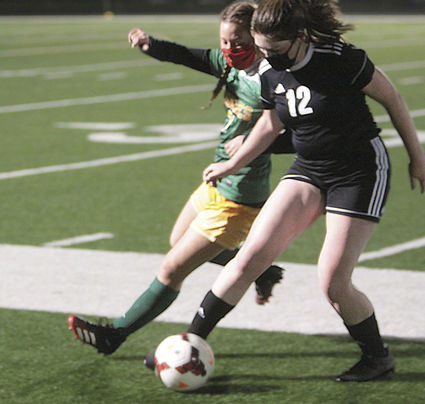 ESTHER RAMSEY, left, battles Cascade's Hailey McKenzie for the control of the ball in the Huskies' win over the Cougars.

Sweet Home's girls soccer players opened up their season with a 2-1 win at home over Cascade.

"The girls were excited to play and come back and have a season," said Head Coach Ramiro Santana.

"When we first started, we didn't have a whole lot of control of the ball. As the game progressed, we started getting more touches on the ball and had more time dribbling and passing the ball amongst ourselves. Then we were able to control the ball more," Santana said.

"You're going to create more and get the other team more tired by passing the ball that much," he said.