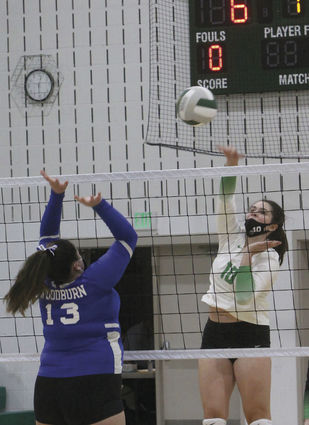 ADAIRA SLEUTEL-BURGER slams the ball past a Woodburn opponent during the Huskies' win over the Bulldogs.

Sweet Home's volleyball team, loaded with players who've been all the way to the final match in the last state championship, looks like it is picking up where the Huskies left off. 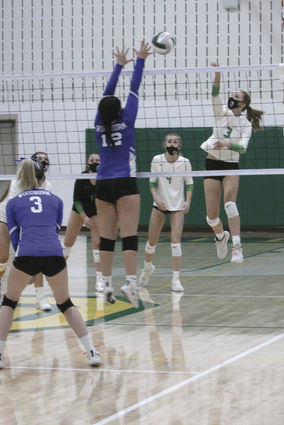 Emily Windom registers a kill over the Woodburn defense.

"We are a very dominant, experienced team," Coach Mary Hutchins said. "In practice we set goals to serve tougher and communicate more on the court. We are working on practicing with intensity at all times."

She noted that the Huskies "have practiced and played together for years and years."

"These girls play volleyball. It's what they do. Our goal is to finish strong and play hard in however many games we can get."

Sweet Home's varsity is setting an example for the younger girls who are moving up, she added.

The Huskies will play Cascade on the road Wednesday, March 10. Their scheduled home game with Philomath on Thursday, March 11, isn't happening because the Warriors aren't allowed to play.

However, Sweet Home will host Corbett (1-1 after splitting with North Marion) and Marist (1-1 after a win over Siuslaw and a 0-3 loss to Junction City) on Saturday.