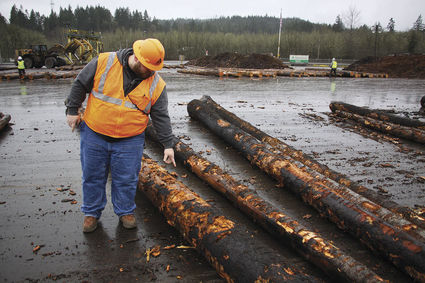 ROB MARTIN, log yard supervisor at Santiam Lumber Mill, points out fire damage on logs waiting to be cut into lumber at the facility.

In a line of trucks waiting to unload logs at the Santiam Lumber Mill between Lebanon and Sweet Home on a morning earlier this month, most carried timber with clear signs of fire damage on the bark.

That's because the Weyerhaeuser mill is busily producing lumber from logs salvaged from the wildfires last summer – the Holiday Farm Fire that burned along the McKenzie River and into the Mohawk and upper Calapooia areas, and the Santiam Canyon fires, which damaged timber in the Snow Peak area.

"Our plan is to salvage as much as possible this year," Virtue said. "We're still able to harvest a tree as long as the fire did not get through the bark, if there isn't a scar on the tree or the fire got through into the white wood, which is what we call it."

Weyerhaeuser, he said, last fall began concentrating all its resources into fire salvage, "so we could harvest those burned trees as quickly as possible."

"Most of those trees were on the young side – not optimal, but usable."

Last week Virtue scanned the mill operations from the log yard with Rob Martin of Sweet Home, who supervises those operations.

Martin and Virtue said the mill is getting some 190 loads a day of fire-damage logs from Mohawk, Springfield and Snow Peak.

The loads started coming in from burned areas in late October, Virtue said. Currently, about 60 percent is coming from Springfield tree farms that include local areas that were burned.

"We got roads opened up and we were able to get into some of those units," he said. "I don't know how many truck drivers they needed to find. We brought in contractors to help out. I ran into a truck driver a week ago from Olympia, Wash."

Weyerhaeuser experimented with burned logs, "trying to figure out how to best maximize it," he said, noting that the mill's equipment doesn't do well with char on certain logs.

"It works with scaley bark like eucalyptus, but not so well with Douglas fir," Martin said.

Virtue said some mills can take bigger logs with char on them and often cutters can eliminate timber in the woods that won't make the cut at the mill.

Initially, he said, mill operators wondered if they would be able to produce chips from bark exposed to heat and flames, he said, but that hasn't proved to be an issue.

"All the residuals that come from that, the deco bark – we're really fortunate that the beauty bark, the deco bark industry didn't have issues with that. By the time it goes through the grinders, that product looks great."

The mill is producing about 45 chip truck loads a day, he said.

It is operating four days a week and seven nights a week to try to meet the demands of a market hungry for wood products.

The combination of increased new housing starts and the effects of the COVID shutdown on do-it-yourselfers, who find themselves with time to get going on projects, have contributed to that demand, Virtue said. 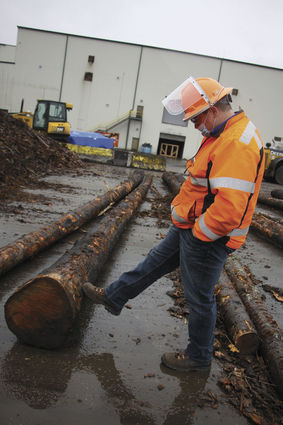 GEORGE VIRTUE, inspects a log in the yard at Santiam Lumber.

"What I've heard, from the buzz of the industry, is that one of the advantages of COVID is it has promoted the idea of people being able to work from home, so there's been a mass rush from cities into suburbia, which has created a housing boom.

"For us, we increased production about 20 percent. We were very fortunate that we had another customer come on board. And the lumber market is really really good right now.

"Every mill I know of has maxed out production. The timing – trees that needed to be harvested and the market, it's a win-win."