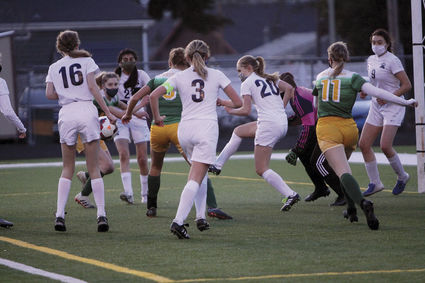 SWEET HOME and Newport girls battle for control of the ball in front of the Cubs' goal during their game Thursday evening. They tied 1-1.

Head Coach Ramiro Santana said that his team started controlling the ball right from the get-go against La Pine. Chloe Fairchild scored a goal for Sweet Home within the first two minutes of the match. Around the eighth minute, Jenna Wolthuis scored a second goal for the Huskies.

Santana then put some nonstarters in against La Pine. He noted how his roster is big and the contest was a non-league match.

"We were not worried pre...