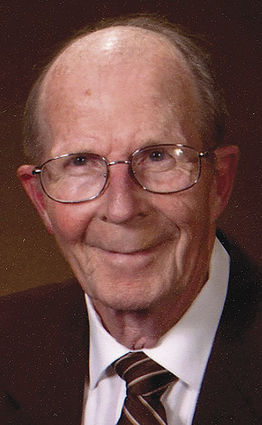 Magnus “Gene” Eugene Chelstad passed away peacefully in Lebanon at the age of 87 on March 14, 2021, with his loving wife Vivian at his side.

Born Dec. 13, 1933 to Norwegian parents Bessie and Magnus, Gene grew up working on the family farm in Iowa and graduated from high school with a small class size of 12 students.

At the age of 17, Gene pursued his dream of becoming a G-man and joined the FBI in Washington D.C., working in their nascent fingerprinting department. He was encouraged to get a college degree, and decided to return to Iowa to attend Iowa State University.

After graduating with a B.S. in forestry, Gene was drafted into the U.S. Army, and was eventually stationed in West Germany. He received several awards and distinctions, including a medal for Good Conduct.

Following his honorable discharge from the Army, Gene began working for the U.S. Forest Service and met his wife Vivian in a Sweet Home church as she was presenting a slideshow about her time serving as a registered nurse in Africa.

A promotion for Gene moved the new couple to Southeast Alaska, where they lived in many different towns over the years and had their three children.

Along the way, Gene discovered his lifelong love of saltwater fishing, catching Pacific salmon and halibut in early-morning hours – usually in the rain.

Another promotion sent Gene and family to Washington D.C., where he helped craft balanced national policies on the usage of our forests and lands both domestically and abroad.

He represented the U.S. in negotiations with Japan, attending meetings with his counterparts in Tokyo.

While in D.C., Gene enjoyed experiencing the history and art available in the nation’s capital, taking many family trips to the Smithsonian museums.

The 1980s found Gene moving his family to Northern California where, along with a long commute which enabled time for reading, he embraced the ability to build out gardens where he and Vivian could grow a wide variety of fruits, vegetables and flowers in the California climate.

With decades of seniority under his belt, Gene was now able to choose his next posting, so he and his family decided to go back to Alaska, where he eventually retired from his 39 years of service with the U.S. Forest Service.

After retirement, he and Vivian returned to their journey’s ​beginning, Sweet Home, where they built their dream home with a beautiful view of the mountains and enjoyed plenty of free time for fishing, gardening and visits with family.

Gene is survived by his wife Vivian of 61 years; his sister Lorretta and her husband Bryce Daisy; his children Andrea (Chelstad) Kerr, John and Erik; and his nine grandchildren, Mendal, Skyler and Atarah (Andrea’s children); and Raider, Elizabeth, Jacquelin, Manny, Martin and Miranda (John’s children).

He was preceded in death by his father, Magnus J. Chelstad; and his mother, Bessie (Mumper) Chelstad-Sorenson.

Gene was active in the Lutheran faith his entire life, attending, volunteering and serving in local churches in each of the towns he lived in over the years with his family. With this in mind, any donations in Gene’s honor may be made to a charity or faith of your choice.