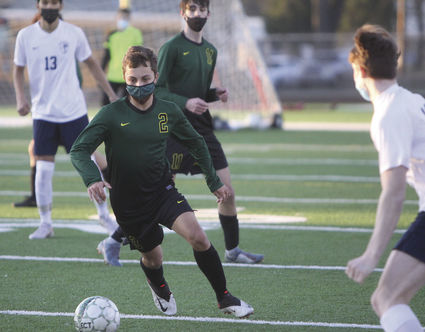 Injuries have been an ongoing problem for the Huskies this season.

"I think that's kind of been the story in the last couple of games," said Head Coach Eric Stutzer. "We're struggling to be healthy right now, especially since the Sisters game. We got dinged up pretty good, especially in our back line."

"We've got people playing positions that they're not entirely used to, which creates a ton of problems just because of our level of inexperience and how young the team is."

Against Stayton, the Huskies went into the contest with a lot of respect for their opponent's abilities on the soccer pitch, Stutzer said.

"I think that the kids have spent so many years watching Stayton and seeing how well they've done and what an exceptional team they are, that they kind of had stage fright going into the game," he said. "I know that a couple of them mentioned that they were kind of in awe of what Stayton can do."

And Stayton certainly did a lot to hurt the ailing Huskies defense.

"They really took advantage of the defensive problems we were having, specifically just having players out of the game and missing," Stutzer said.

"We were collapsed on the defensive end, which we shouldn't have been. And we were really favoring the right side of the field, which wasn't very good for us at all. It took a lot of our players out of the mix and put a lot of players out of position."

"It wasn't a very good game on our part," Stutzer concluded. "It definitely leaves a lot of room for improvement."

He did take away a positive: "I think that the boys now have experienced Stayton, and they feel like they definitely can be more competitive than they thought they could be, which I think is good from a sports psychology standpoint."

"We're just going to have to really come together and work on our midfield play if we're going to be competitive against a team like that," he said.

A need for better midfield performance was also a theme in the match against Philomath. "We were really struggling in the middle part of the field. That seems to kind of be the M.O. the last couple of games. Players weren't in position; they were collapsing to one side or the other," said Stutzer.

"We gave up a couple of really easy goals that we shouldn't have given up. We had a lot of guys again playing in positions that they weren't used to playing."

Mason Lopez sat with a concussion and Judah Christman couldn't play because of a hamstring injury.

Twenty minutes into the second half, Husky goalkeeper Evan Towry was sidelined with a leg injury after colliding with a Philomath player. Chris Christman filled in for him.

"Christman did an excellent job going in as keeper, said Stutzer. "It's the first time that he's done that at the varsity level. He came right out of the gate and made some great saves."

Stutzer also gave credit to Caleb Christman. "Every position I put him in, he was excellent. He was a standout," he said.

While swapping his players' positions as much as he's done this year is certainly not business as usual, Stutzer thinks the experience could benefit the program in the long run, he said. "We still have a lot of inexperienced players that are learning positions, and having them play in positions they're not used to is a good thing, because down the road, especially as young as we are, that's going to pay big dividends," he said.

But no team wants to have to work around the number of injuries that Stutzer's squad has suffered.

"A lot of that has to do with our lack of prep time going into the season," Stutzer hypothesized. "Getting people where they need to be, when we usually have three or four weeks to prepare, in only one week before jumping right into games, is really hard on a body. And then you're playing two games a week, against some very physical teams in this league. It's really hard, especially when you're young and inexperienced, to keep up, with the lack of depth that we have."

Looking ahead to this week's contests against Cascade and Sisters, Stutzer said "I think that the boys feel like they're two teams they can compete with. If we put pressure on in the midfield and play well there so we can get the ball up to the forwards, then we do have a pretty good chance against Cascade."

"Looking back at the Cascade game, had we been able to put balls on frame and capitalize on opportunities, we might have won or tied. It could have been a very different outcome from the score standpoint." But he said player health will be a factor this time around.

The Huskies lost to Sisters 1-0 on March 9 in their closest game of the year. They will have another chance against the Outlaws on Thursday March 25. 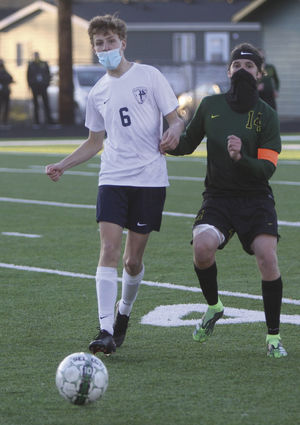 CHASE LOPEZ jostles for a shot at the ball.

"It really depends on how our kids respond to adversity," said Stutzer of this week's matchups. "I think there is a lot to be optimistic about, but we really need players to be healthy to capitalize on that optimism."