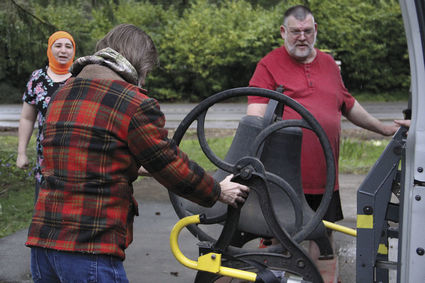 DW-WAYNE HILL, right, and Clive Millett unload a church bell that Hill has purchased for Cascadia Bible Church. At left is Krystal Hill.

Dw-Wayne Hill II of Sweet Home has collected bells since he was 15 years old. His most recent find was the oldest, largest, and most expensive bell he has ever owned.

And he decided not to keep it.

Instead, he donated it to his favorite place of worship, Cascadia Bible Church.

According to an inscription on the bell, the company responsible for its creation was CS Bell Company, which was in operation between 1895 and 1970.

The bell first got on Hill's radar about 13 years ago, when his friend Robert Tobey, a p...