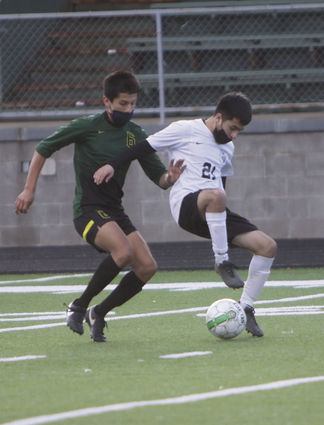 EDDIE MARTINEZ-MAYA battles with Taft's Josh Ruiz for the ball.

Two contests on Sweet Home's boys soccer schedule, on March 23 against Cascade and March 25 against Sisters, were cancelled.

The team was down to 11 players on Tuesday, and one of those was a pretty inexperienced player and wasn't 100% healthy either, he said.

So Stutzer made the call to cancel Tuesday's match against Cascade.

The team was then down to 10 players on Thursday for the scheduled Sisters match, so Stutzer also cancelled that game.

"We have a number of injuries and a nu...