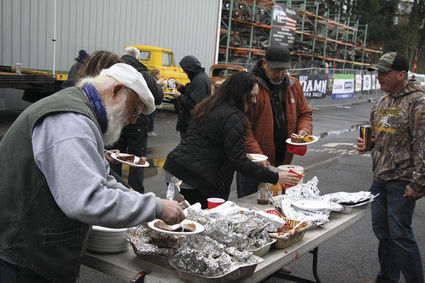 VISITORS load up on barbecue and associated fare at the competition.

The air was clouded by smoke over the weekend at Radiator Supply House in Sweet Home, but it was good smoke: the kind that creates top-notch barbecue.

And that's what was happening as the local J&C Barbecue hosted its first-ever competition, the 2021 Sweet Home Icebox Cookoff, with the help of the radiator manufacturing firm and a bunch of local sponsors who ponied up cash for prizes and liquid refreshments for 41 teams that signed up to compete and a healthy crowd of guests invited to help organizers do a dry run for what they hope will be a much more public event next year.

We have big plans, as a group," said Christy Poteet, who owns Lebanon-based J&C with her husband, Joe.

"I think we have a big advantage to really grow this into a very big community event. Sweet Home has the facilities. It needs this."

Radiator Supply House's headquarters, located at the site of the former Clear Lumber mill on 47th Avenue, next to the city water plant, seemed to be working out quite well Saturday.

Pop-up canopies, most sporting the names and logos of barbecue joints from around the Northwest, were pitched around the perimeter of the property. Judges, holding clipboards, worked their way from booth to booth.

In an open square-like space in front of the main office, a band performed as clusters of barbecue aficionados chewed the fat around smoking pots of meat, while others bore trays of samples of their latest creations, which they proffered to anyone who showed an interest.

Off to one side, Victor Perez of Salem, wearing a T-shirt emblazoned with "Super Skewer," carefully rotated a spit containing a pig and an alligator.

A heavily laden table held pots of chili (meat, not beans) and corn salad, along with platters of ribs, pulled pork, succulent steak and chicken.

Promoting the Sweet Home event was Mike White, owner of the Best Damn BBQ Sauce company of Salem, who burst onto the barbecue scene three years ago after winning a first-place award in the 31st Annual American Royal World Series of Barbecue Sauce Contest, the largest competition of its kind in the world, with a barbecue sauce he concocted after he couldn't find any in his refrigerator to put on his breakfast eggs. He beat out 400 competitors from around the world, and decided to go pro.

White said COVID has temporarily slowed the popularity of what he described as "one of the fastest-growing sports" in America. He said three "super low-key, very private" events, limited to cooks and judges, have been held.

White, with RSH co-owner Will Garrett and Marketing Director Wes Collins, who emceed, later handed out awards to first-day winners in the three competitions – all the cash prizes in fat packs of the $2 bills RSH is known for distributing.

Contestants were given tickets with numbers on them, which were attached to their entries, so judges and other participants had way of identifying who produced which entry until the winners were announced.

Poteet, who won awards in all three competitions held Saturday, said she and Joe got "really addicted" after their first competition, in 2017.

"Honestly, this is an addiction, as you can tell," she said, indicating the scene in the square.

Shortly after they started competing more seriously, "we knew that something like this would work really well in Sweet Home."

She got White to agree to promote the event if she could come up with a location, and then connected with Collins, with whom she'd attended high school.

"I messaged him on Facebook and said, 'Hey, we have an idea for a barbecue competition.' I knew this location would be really, really great."

That was in February and things obviously came together and people have gotten on board, she said.

"They really want to see this be the biggest competition in the Pacific Northwest and really showcase our system of barbecue here."

Each region of the country – the South, the Midwest, the East, the Pacific Northwest, she said, has its own particular style and flavors of barbecue.

"We do have a really good flavor profile. And so is really getting these competitors a chance to be showcased, getting their food in front of judges."

It's not just about winning, though those receiving awards definitely were relishing the moment. It's also about learning, about getting better, she said.

She told how Joe Poteet was competing recently in Texas at the International Championships – which, in non-COVID years would include competitors from, literally, industrialized nations all over the world. Poteet was facing 305 other competitors, which was so large a field that organizers divided them into smaller groups.

"During the first day, Joe got his scores back and realized he could make changes to improve those scores. He did and finished 16th the next day out of 151 competitors, two-tenths of a point out of the awards.

"You do get to learn. You can learn. It is not just presentation. You're looking for tenderness, taste, Everything that goes into it."

Christy Poteet noted how a BBQ, Blues & Brews competition hosted by The Mill Casino in North Bend drew nearly 15,000 people, who paid $5 each to get in, then paid extra to sample barbecue and brews from 20 breweries at the event, sanctioned by the Kansas City Barbecue Society.

That's what she has in mind for Sweet Home.

"Even though it's COVID and we're kind of restricted, this allows us to work out the kinks now," she said, gesturing at the activity around her. "We're not looking to make money. This is reinvestment." 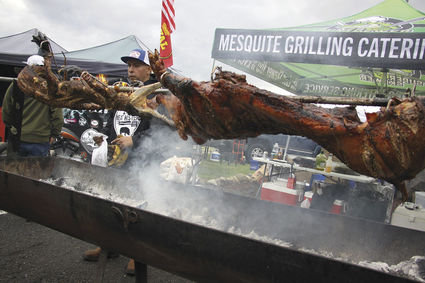 VICTOR PEREZ, of Salem, checks out an alligator and a pig that he is barbecuing during the 2021 Sweet Home Icebox Cookoff,held at the Radiator Supply House headquarters, Saturday afternoon.

-- Here's a link to Radiator Supply House, which hosted the event: http://www.bestprosintown.com/or/sweet-home/radiator-supply-house-/