Director: Jamboree a go – in some way 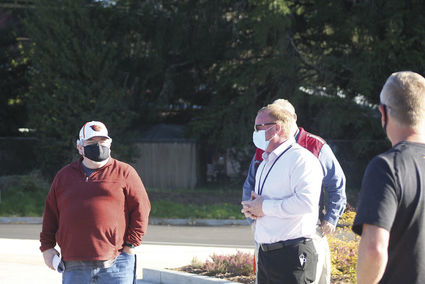 Robert Shamek told the Sweet Home School Board Monday night, April 12, that the annual Oregon Jamboree festival will be different this year if current state and county protocols hold firm.

The executive director of the country music festival said that current law states that an event must provide 86 square feet of space per person, and based on the size of the typical Jamboree venue, Jamboree staff is thus moving forward in the hopes of having 5,000 patrons at the event.

"It's all based on still being at the level 'high,'" he said. "And I hope to God we're not still at the level' high' come August."

"We would love to put the Oregon Jamboree on this year, if it's possible," Shamek told the board. "If we don't, it's going to be really tough to sustain for another year. That would be heartbreaking, to have something so awesome go away that gives back so much to our community."

He said that even with less people, he still expects lots of campers to come for the event. 2020 was going to be a record yea,r as far as camping numbers, and Jamboree staff decided to roll the sold-out camping tickets over to 2021.

Shamek is planning on scaling back on vendors, however, in response to the planned decrease in attendees.

"We still want enough choices for our patrons," he said. "But we also want our vendors to have a successful year."

Shamek noted that plans are still subject to change.

"We try to run a top-notch program," he said. "Hopefully, by the time the Jamboree comes around, there won't be any questions as far as what the protocol is going to be."

Shamek said that the event has "really been life-changing, not only for me but for a lot of people that are involved with the Jamboree. It's something that we do every year, typically. And people absolutely love to come to Sweet Home. They like the river, going through town, and all the campsites."

The school board approved the plan.

"Kids need it," said Board Chairman Jason Redick. "They need normalcy back. It's been too long, and it's taken too much of an effect. They need to get back to normal life."

Supt. Tom Yahraes said: "I know this is going to be good news for the kids. And we'll do it safely."

Still, the district is offering comprehensive online learning to 25% of students that are opting not to return to in-person education.

"We have a commitment to our community that we would provide this kind of education," said Yahraes of the online format.

Chief Academic Officer Rachel Stucky said that in building these new schedules, "We tried to get older students home first so they could look after their siblings." She noted that parents with young children have been working very hard for a year to give them supervision in the face of unusual circumstances.

High schoolers will still only have four periods in a day, which isn't quite business as usual.

Before COVID hit, most high school students had seven periods in a day. This year, due to COVID, staff made an operational decision to go to a four-class system.

Yahraes said that the high school will return toits regular schedule next year.

The district also recently proposed to shift some of their elementary school boundaries. The shift would have the current Hawthorne Elementary attendance area north of Highway 20 move to Oak Heights Elementary, effective with the upcoming school year.

In a letter to affected parents, Yahraes wrote, "We do not have additional classroom capacity at Hawthorne," and the boundary adjustments would be made "in order to avoid overcrowded classrooms."

He also wrote in the letter that "We realize that changing schools can be challenging."

But he said, "Sweet Home's growing, and that's a good thing. Folks are coming here. They're seeing how pretty the area is. We have good-looking schools and great instruction. And it's causing some growing pains, and we need to make some decisions."

"We can do nothing, which I don't think is a responsible thing to do as we see the apartments popping up. We could also take too large of an action too soon, and I don't think that will do us well."

District leaders "should really sit at the table with a lot of different folks and talk about the future of Sweet Home and our facilities, and what we need to do," he said.

The number of K-5 kids that will be affected by the proposed shifting in school population from Hawthorne to Oak Heights would be just over 50.

The district will be providing a transition plan for families of students that do not want their child to be making the switch in schools immediately.

The letter from Yahraes to affected parents says that "If you have a student who is already attending Hawthorne and you would like them to continue to do so during the upcoming school year, they may as long as you provide transportation."

An information session for families affected by the proposed boundary changes will be held on Tuesday, April 13 at 6:30 p.m. at the Sweet Home Junior High School library.

Yahraes noted that an increase in enrollment is not typical this time of year at the district.

He attributed the increase mainly to families and students being more comfortable going back to in-person learning.

"If a kid in class is struggling with their learning and you can tell they just need a break, they can be placed in a room where they can take their mask off and sit for three to five minutes, and get their bearings again."

She said that the district is also allowing elementary students to take mask breaks outside and interact with each other, as long as they stay in their designated spaces 6 feet apart.

The school board approved a number of retirements and other personnel actions. Board members:

- Approved the hire of Daniel Synnott, fifth-grade temporary comprehensive distance learning teacher for the district for the remainder of the 2020-21 school year.

- Approved the hire of Elisa Thomas, fourth-grade temporary CDL teacher for the district, for the remainder of the 2020-21 school year.

- Approved the hire of Chris Kimber, fifth-grade temporary CDL teacher for the district, for the remainder of the 2020-2021 school year.