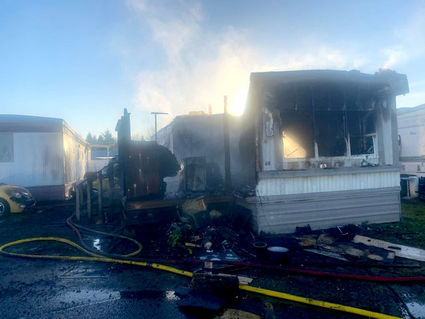 Linn County Dispatch received multiple 911 calls at 6:13 a.m. for a mobile home on fire at the Wagon Wheel Mobile Home Park in Sweet Home. The 911 callers reported that the fire began on the front porch, but had spread to the home while they were making the call. The single occupant of the home was awakened by her smoke detectors which had been replaced within the last month. She was able to evacuate the structure with her dog, and there were no injuries reported.

A Sweet Home Police officer who was on scene within minutes of the first 911 call reported that the home was fully involved. Sweet Home firefighters responded with four engines and 15 personnel. The fire was quickly brought under control; however, the structure and contents were a total loss. The mobile homes on either side of the burning structure were exposed to extreme heat and both sustained minor damage, as did the occupant's vehicle parked nearby.

According to a SHFAD statement, "with the rapid spread of fire, it is very likely that without working smoke detectors this would have been a fatal incident. Sweet Home Fire would like to take this opportunity to remind people of the importance of checking your smoke detectors. This should be done twice a year, and smoke detectors should never be left disabled."

The New Era will publish a fuller report in our next issue.