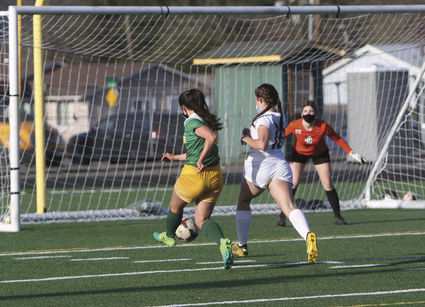 NATALIE RODGERS works for a shot against Junction City.

Sweet Home's girls soccer team beat Junction City 2-0 on April 6 and lost 4-0 to Estacada on April 8 in their final matches of the season last week.

"Against Junction City, we passed the ball much better and had a lot of opportunities," said Head Coach Ramiro Santana.

Sweet Home capitalized on those opportunities when Madison Harris scored 10 minutes into the first half and Jenna Wolthuis scored in the 21st minute of the second half.

Against Estacada, though, the Huskies were unable to put any balls in the back of the net in the 4-0 loss.