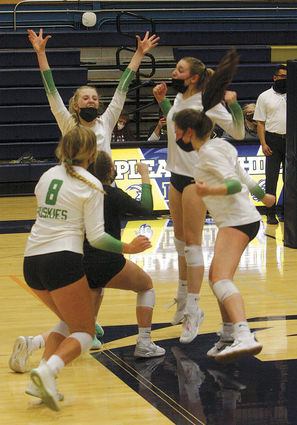 Husky volleyball players celebrate after winning the state championship Saturday against Sisters. See page 10 for photos and to hear from Coach Mary Hutchins and her players, who won the school's first-ever state title in the sport.

When Sweet Home's volleyball players left the court after losing in the 4A state championship game to Valley Catholic, they made it clear they had unfinished business.

Saturday afternoon, April 10, they made good on that.

"We hadn't even left the court after the conclusion of the championship game, and they were telling me, 'We are winning it next year,'" said Head Coach Mary Hutchins. "They had so much determination, and I fully believed them."

But due to circumstances no one could have foreseen at the time, there was no state volleyball tournament the next year, the fall of 2020.