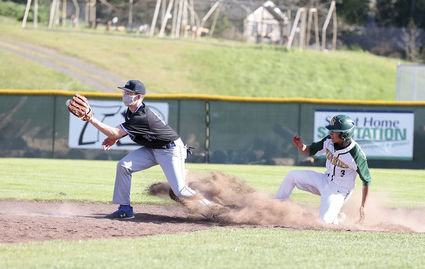 SWEET HOME'S Casey Valloni gets to second ahead of the throw in the Woodburn game.

Sweet Home's baseball team got off to a fast start, going 4-0 in its first contests last week and early this week.

The Huskies started the season off with a 10-0 win against Woodburn on Thursday, April 15.

The Huskies pitched four players in that game.

"Pitching went really well for us," he said.

The Huskies started Holly, then went to Nathan Aker, then Armstrong, then Jon "Houston" Holly to close the deal.

In the 15 outs of a five-inning game, Husky pitchers struck out 12 batters.