Couple mixes cycling, other pastimes as they tour world 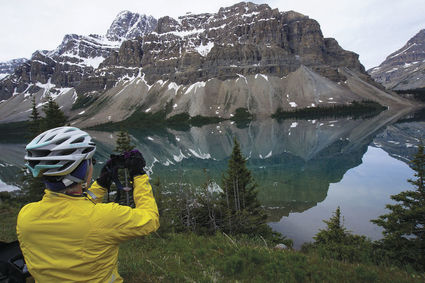 Donna Short snaps a photo along the Icefield Parkway in Alberta, Canada during one of her bicycling trips with her husband, Doug Robin, who provided this photo. Donna's work is among the photos currently on display in the gallery at Sweet Home City Hall.

For Donna Short, taking a photograph helps her be present in the moment and really see what she's seeing.

"It's a way to see more intently. Even if I never do anything with that picture ever again, it helps me be there and see it," she said.

She and her husband, Doug Robin, both take thousands of pictures every year as they tour different countries on bike, but some of their pictures include scenes from Sweet Home, one of their most favorite places to ride a bike through.

A few of Short's favorite Sweet Home pictures are currently hanging at City Hall for an exhibit hosted by SHOCASE.

At home, Robin had pulled out a couple totes filled with picture slides that he intended to scan since COVID kept them housebound this past year, but he hasn't been able to muster up enough courage to tackle the task, he said. That's because he's looking at about 1,500 slides he'll have to go through.

Short, 65, and Robin, 78, had other plans last year that were hindered by COVID. They were going to finish a five-part bike tour across Canada that they had started in 2013.

The two first rode their bikes from Vancouver to Calgary that year, and returned in 2016 to bicycle from Jasper across the Icefields Parkway, a 144-mile stretch through two of Canada's most scenic national forests. From there, they continued east until they reached Winnipeg, then traveled south to Fargo, N.D. to catch a train home.

"We cheated on the third segment because we took the train to Fargo and said, 'We don't really want to do this part in Canada, so we're going to do it in the northern United States," Short said.

So in 2017, Short and Robin took their "cheat" bicycle tour for 1,361 miles through Minnesota, Wisconsin and Michigan, avoiding the bad part of Ontario, which includes poor roadways and lots of mosquitoes, they said.

Two years later, they rode a loop from Detroit, Mich. to Toronto and back. 2020 was supposed to be the year they completed the tour from Toronto to St. John's – the farthest eastern tip of Canada – but the country has been closed to non-essential travel due to the pandemic.

Robin said Short is the logistics person and he is the gear guy.

"I say she is the brains and I am the brawn," he said.

The pair have been touring the world on bike together since 2003, when they bicycled 186 miles in the San Juan Islands and Victoria, BC. They continued tours in Washington and Ore-gon, and then spent a summer bicycling 3,652 miles across the United States from Newport to Boston, Mass.

Along the way, Short will hand out a business-card sized paper to special people they meet. It reads, "Thank you for being one of our Angels of the Road," and directs these "angels" to their blog at ddlivestrong.blogspot.com.

"I don't think we had any on our cross-country trip, but after that, we realized that there was (what we call) angels of the road," Short said. "We made up a card that we could give to people because it happens so much."

It happens regularly to them when they're lost or looking for a trail or a place to eat or sleep, she said. Somebody will show up and lead them to where they want to go.

Robin recalled a man in Canada who was commuting home from work and turned around to lead them to a motel some distance away.

There's also the man who offered them lunch at his house, and the person who offered his new pump house as an overnight shelter.

They could recount stories about "angels on the road" for a long time, Robin said.

Sometimes Robin and Short get to be angels, themselves.

Like the time Robin was eating in a restaurant when he saw a homeless man struggling with his bicycle at a gas station. He went over to the man to find out what was wrong, and realized the problem right away: the air pump at the station did not fit the valve on the bike.

Robin used his own pump to help the man, and the next day he bought a valve adapter in case he ever ran into someone with the same problem again. But it didn't take long until they saw the homeless man again, so Robin handed the valve to him.

In 2011, Robin and Short toured 2,900 miles in Europe on bike from Portugal to the Netherlands, and returned through Europe two more times since then, adding a couple new countries to their itinerary.

In all that time, they have met hundreds of strangers who became friends, and eaten good and strange foods.

"You gotta be kind of be careful because I think it was in Germany, not knowing the language, I ended up with eel. And I really didn't want to eat eel," Robin said. "It tasted like frog legs. It sort of had that stringy texture."

They also started taking their daughters on tours with them, which have been among their most memorable adventures, he said.

Riding a bike was nothing new for Short and Robin when they met while working for the U.S. Forest Service.

A bicycle was Short's only transportation when she was going to college, and Robin took up biking in 1974 after he left the Army.

Short hadn't ridden a bike since her college days, but Robin reintroduced her to the sport.

"She wasn't hard to talk into it at all," Robin said.

But the two found there's always a rough patch that eventually hits them when they spend so much time together on bikes. It's usually a struggle one of them is going through, and the other carries them through it.

But learning to get through those hard moments has unexpectedly prepared them for COVID.

"Traveling together by bike and spending that much time together on the road and not quite knowing what's going to come next, (it) totally prepared us for what happened this last year," Short said.

"Having that level of uncertainty and spending 24/7 together and stuff was not a big deal because we had practiced it so much already." 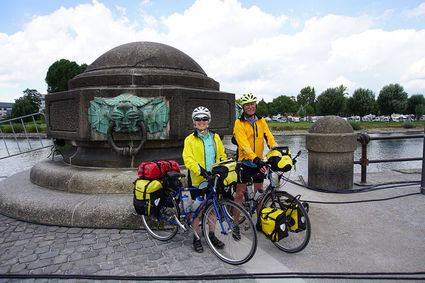 DONNA SHORT and Doug Robin, above, make a stop in Koblenz, Germany, during a tour through Europe.

Once COVID restrictions de-escalate throughout the world, the couple hopes to return to Europe again, and Canada. But for the time being, they continue to ride around Foster Lake, or do tours on the west coast, or bike to Corvallis for lunch.

It's the relatively slow pace of bicycling, compared to driving, that Short likes. It allows her to notice more, to see the daffodils and trees in bloom, and feel the warm weather on her skin, she said.

"You see things differently than when you're in a car," she said.

And maybe she'll stop to take a photo.

Robin said he likes bicycling because he's moving under his own power. And it's something he's going to do for the rest of his life.

"I'm gonna keep riding until I forget where I parked my bike," Robin said.