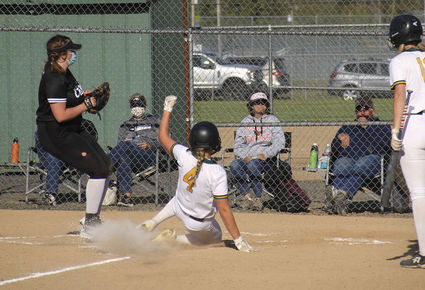 BROOKE BURKE slides into home for a score against Sisters.

The Huskies went 2-1 last week on the softball diamond, with wins over Stayton and Sisters coming after a loss to Newport early in the week.

Against Newport, Sweet Home jumped out to a 2-0 lead in the bottom of the first when Bailee Hartsook singled to score Maddie Harris and Savannah Hutchins.

In the second inning, Harris hit a ground ball and reached on an error, scoring Mikayla Guthrie. Harris would score later in the inning on a passed ball to bring the Huskies lead over the Cubs to 4-0.

But Newport rallied in the top of the third, scoring four runs to tie the game at 4-4.