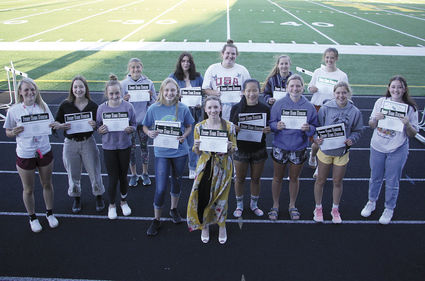 GIRLS SOCCER players hold their awards after the entire team received the Coaches Award for recording the best grade point average among 4A Division soccer teams this season, a 3.93 cumulative GPA for the team.

Natalie Rodgers was named Most Valuable Player for the girls soccer team at an awards ceremony held Tuesday, April 20, at Husky Stadium.

Coach Ramiro Santana said Rodgers is a player "colleges have been asking about" and said that other teammates look up to her.

In another big moment, the entire team was named recipients of the Coaches Award.

Assistant Coach Jill Wilson said that the decision was made after Sweet Home was named the top girls soccer team in OSAA's 4A division academically, with a 3.93 cumulative GPA.

"They were second in the state overall," Santana added. "It's pretty nea...