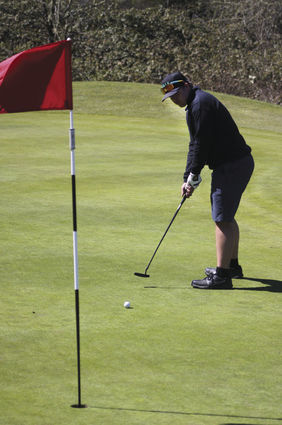 DAKOTA MELVIK putts during an earlier match this year. He finished with a 109 in Newport.

Sweet Home qualified two golfers for the state 4A tournament from the district tournament held Monday at Emerald May 10, at Emerald Valley in Cottage Grove.

Late results showed Carsen Perry and Joseph Hiemenz as state qualifiers after the Huskies placed third out of six teams.

For Sweet Home, Perry finished with his lowest round of the year, shooting 94, followed by Hiemenz with a 101. Morgan Sands had a 113,...