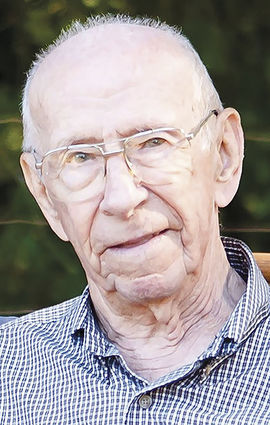 Paul grew up in Colome, S.D. and earned a bachelor’s in electrical engineering at South Dakota School of Mines.

He served in the United States Air Force during the Korean War. In June of 1956 he married Norma Claire Peters in Bonesteel, S.D. and together they raised seven children.

The family lived in Omaha, Neb.; Minot, N.D.; Rapid City, S.D.; Chamberlin, S.D.; and Sweet Home from 1967 to 2014 (with three years in The Dalles during that period), attending St. Helen Catholic Church.

In 2014 they settled in Sublimity, joining St. Boniface Catholic Church.

Paul was an electrical engineer for the U.S. Army Corps of Engineers during construction of Foster and Green Peter dams, maintenance supervisor at The Dalles and John Day dams, and finished his career as a project supervisor at Foster, Green Peter, Detroit, Big Cliff, Blue River and Cougar dams. He was a member of the Elks and the Knights of Columbus, and loved golfing and bowling.

Paul was preceded in death by his wife, Norma Peters; three brothers and one sister.

Contributions may be made to Willamette Valley Hospice or St. Boniface Catholic Church.

Serving the family is North Santiam Funeral Service of Stayton.