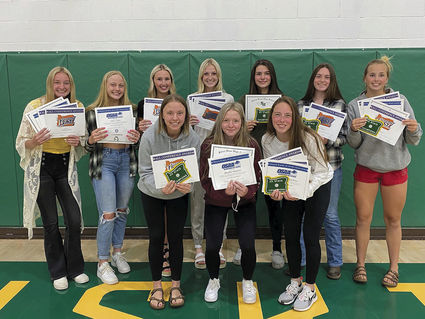 Sweet Home's state champion volleyball team finished its season with an awards celebration on May 17 at the Main Gym. In front, from left, are Graci Zanona, Maddee Housen and Savannah Hutchins. In the rear, from left, are Shelbey Nichol, Chloe Tyler, Emily Windom, Bailee Hartsook, Adaira Sleutel-Burger, Teja Abbott and Jamie Seward. The Huskies finished the abbreviated season 14-1, winning the 4A showcase tournament. They finished second in the Academic All-State standings with a cumulative 3.86 GPA, one-hundredth of a point behind Marist.(3.87). Hartsook was named Player of the Year for the Oregon West Conference along with Sisters' Greta Davis. She, along with Nichol, Hutchins and Zanona, were named First Team All-League. Seward was named to the Second Team, while Abbott and Windom were Honorable Mention. "They were all amazing girls to coach and we were blessed to get this season with them," Head Coach Mary Hutchins said. "They are dedicated athletes and we are so lucky to have them in our program. Their daily work ethic and expectation of themselves is inspirational. I have told them for years that "to be called the best, you have to beat the best – be undeniable.' These girls are undeniable and they create magic when they play volleyball together."