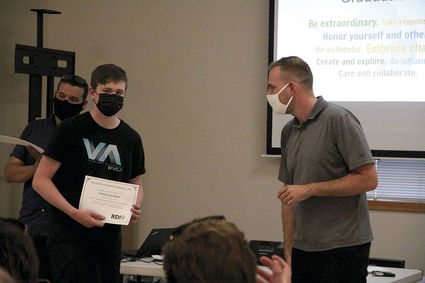 Twelve Sweet Home School District students, mostly from Sweet Home Junior High, but some from the high school and one from Holley Elementary School, graduated from a Rural Development Initiative leadership program on Wednesday, May 26, at the Sweet Home Senior Center.

The program started on Jan. 18 of this year.

RDI has done several adult sessions in Linn County before, but Executive Director Heidi Khokhar said this graduation marked one of the first times that youth have gone through the program.

"We didn't dumb that thing down a bit," she said. "We just brought the program and the kids ate it up like it was brownies."

The program was put on through a partnership with the Boys & Girls Club of Sweet Home.

"We really worked on getting a diversity of interests and ages in this particular class," Khokhar said.

RDI, which is supported by the Ford Family Foundation, is described as "a place-based organization working hand-in-hand with communities to strengthen rural people, places, and economies in the Pacific Northwest." The organization has conducted leadership training for adults multiple times in Sweet Home over the past two decades.

The late Tim McQueary, who was a former Sweet Home mayor, gave the money for the project, Khokhar said. He passed away in February of this year. McQueary and his wife, Jo Ann McQueary, have been very active in RDI leadership training over the years.

The program was funded in part by a Linn County youth activities grant that was designed for the fall of 2020 and spring of 2021 in order to get kids out and about in enrichment activites, especially during this COVID time when there wasn't a lot going on," said Tyler Reece, the teen program director for the Boys and Girls Club of Greater Santiam.

"We talked about social capital a lot with these students, and understanding that the people that you know and the connections you have, have a lot of power," Reece said.

"We're really excited about the future. I say the future, but really that's a misconception. We talked a lot about how youth are always seen as the future of our community. But really, they're part of what we're doing now.

"You have amazing leaders in the back that are just wonderful people," Reece told the parents of the program participants during the graduation event.

Christian Vazquez-Rivera, the program manager for the project, said "I have been doing this specific program with RDI for the last five years, and I have never seen a group that was so interested and was able to grasp the concepts and get to the conversations that were important."

The program participants were given $2,500 and were tasked with finding a community project of their choosing to spend the money on. They chose to put their efforts toward improving Ashbrook Park.

First, the students put mulch around the trees. In collaboration with the city, they plan to put in two memorial benches, one honoring Tim McQueary and the other in memory of former Sweet Home High School math teacher Melissa Klumph, who passed away in March, and who had two sons graduate from the RDI program.

The students also repaired some of the older benches that were "rotting away," said eighth- grader Easten Perry. 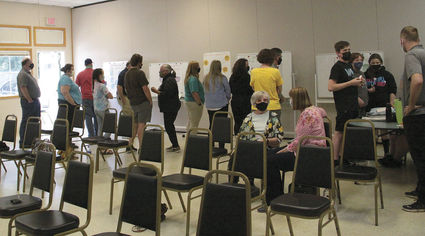 The group wasn't able to actually put the memorial benches in the park in the short time-frame they had, but the city will contact the group once the benches are actually ready to be installed, Perry said.

Khokhar said that she hopes the same program will be run again in future years, and that recent graduates will help recruit and mentor future participants.

Discussing what she hopes the students took away from the program, Khokhar said "We hope that they communicate better with others about things they care about."

She added "We hope that they work more effectively in groups and meetings with partners, and that they know how to get things done better. And we hope that they learned how to create action plans and make better decisions, and figure out how to get resources and keep it going until the very end."