Vehicle in the lake 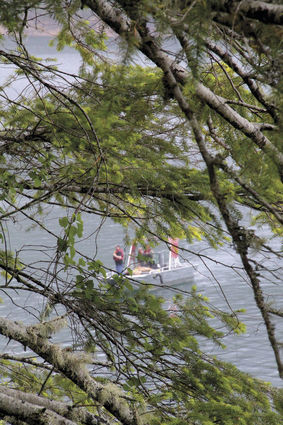 A Sheriff's marine patrol boat hunts for a vehicle that plunged into Green Peter Reservoir Thursday, May 27. Sweet Home rescue personnel and Sheriff's deputies responded at 12:22 p.m. Thursday, May 27, to a report that a car had gone over a cliff into Green Peter Reservoir. According to the Sheriff's Office, the owner of the vehicle was located and told investigators it had been stolen from a campsite at the Yellowbottom Campground earlier in the morning. Divers were dispatched and the vehicle was located in about 60 feet of water and was retrieved, according to the Sheriff's office. According to the Sheriff's Office, it is unknown whether anyone was in the vehicle when it crashed, but there was no indication that anyone was inside. An investigation is in progress.