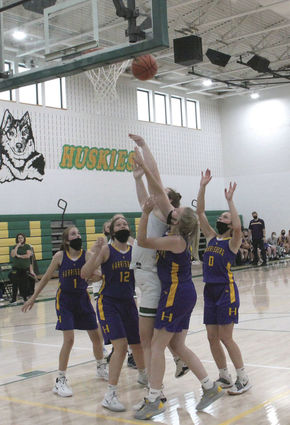 KATIE ROBECK gets some height advantage - and a shot off – over Harrisburg defenders in the Huskies' 47-33 win.

In the losing effort against Stayton, Brooke Burke led the team with 17 points, while Natalie Rodgers put in nine and Adaira Burger scored five.

The girls bounced back against Harrisburg, winning 47-33. Burke again led the Huskies in scoring with 24. Katie Miller scored eight, and Rodgers scored five.

The next game against Newport was a lopsided victory for the Huskies to round out the week of home action.