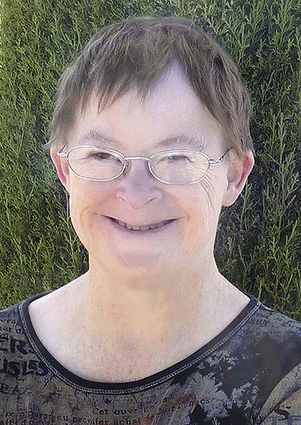 Her parents were among the first to decide to keep a Down syndrome child at home. When Janet was 5 years old, she became the youngest person in Oregon to have open heart surgery. The procedure, done at the University of Oregon hospital in Portland, was supported by blood donations from Montgomery Ward employees, and allowed Janet to live far in excess of her expected life span.

Janet was one of the original attendees of the Sunshine Center, which her parents helped found, and which later became Sunshine Industries Unlimited. Janet had a variety of jobs in the entrepreneurial SIU, her favorite being janitorial work at several office buildings in Sweet Home. She was a devoted participant at Sunshine for most of her adult life.

When her mother became terminally ill, both Hilda and Janet moved to St George, Utah, to live with her brother, George, and sister-in-law, Linda.

After five years, Janet was able to return to Sweet Home, where she lived happily and received exceptional personal and loving care at the Rivera Foster Home from 2013 to her passing.

Janet was a member of the Methodist Church most of her life, and enjoyed many activities there. She also was an accomplished bowler, and loved swimming.

She was a seasoned traveler, visiting three countries and 22 states. Among her other favorite pastimes were reading the newspaper and doing word games of any kind, especially word-finders.

She was never without her Bible and a current word-find paperback. Above all she loved, and was a whiz at, Wheel of Fortune.

She was preceded in death by her niece, Alison Davis of Ashland.

Public viewing will be Saturday, June 26, from 9 to 11 a.m. at the Sweet Home Funeral Chapel. All are invited to a graveside service led by Chaplain Sandra Waldron and Douglas Davis at noon Saturday, June 26, at the Gilliland Cemetery.

In lieu of flowers, please consider making a donation to Lumina Hospice and Palliative Care (www.luminahospice.org).