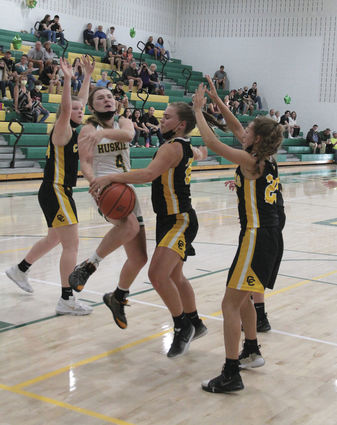 BROOKE BURKE tries to fight her way through traffic against Cascade.

In their last two games of the season, the girls lost to Newport 31-30 and Cascade 64-43. Their final scheduled contest against Philomath was cancelled due to the Huskies not being able to field enough players.

Adaira Burger had a big night in the close loss to Newport, leading the team in scoring with 13 points. Brooke Burke scored nine and Shelbey Nichol pitched in for four.

Burke was the leading scorer in the team's season finale against Cascade, putting up 16. Nichol also reached double digits with 10, a...