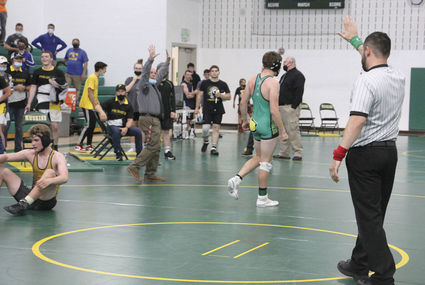 KADEN ZAJIC, walks away after a last-second defeat of Cascade's Blake Perlichek, left, to clinch a berth in the state wrestling tournament.

Thursday, June 17, was a big day for Sweet Home as 21 wrestlers qualified for the state tournament.

But the Huskies' last qualifier was the one that electrified the crowd in Sweet Home's Main Gym, a fourth-place finish by 170-pounder Kaden Zajic, who had to win a wrestle-back with Cascade's Blake Perlichek, who had pinned him earlier in the tournament, to secure a berth at state.

It was a barn-burner, even by wrestling standards, where things can get dramatic.

After multiple halts to the match as trainers and coaches patched up bleeding spots on Zajic's face, the sophomore scored a last-...