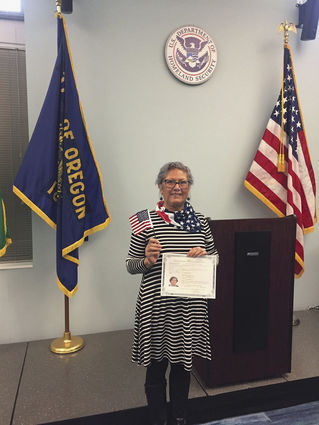 NELIA TARASKI holds her citizenship papers after taking the oath.

Nelia Taraski is now able to vote. And run for local office. And visit her parents without fear of big hassles at the border.

Taraski, 51, who has been director at Little Promises Preschool since 2013, became a U.S. citizen in a small ceremony in February, nearly 30 years after she moved to the United States following her marriage to her husband, Pete Taraski.

"Now I'm going to run for governor," she joked – a frequent occurrence. " If Arnold Schwarzenegger can do it, I can."

Born and raised in Monterey, Mexico, across the border from Laredo, Texas, Taraski had her first encounter with...