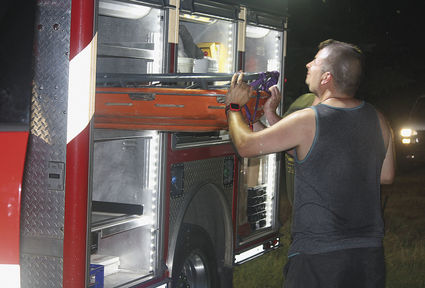 SHFAD RESPONDERS pack up after locating and rescuing two people who got trapped along the South Santiam River Friday night after one of their inflatables went flat.

A man and woman on inflatables were rescued from Santiam River on Saturday evening.

The couple was floating on rafts down a "really inaccessible point in the river," said Firefighter Randy Whitfield. Whitfield said one of the rafts went flat, and the man hurt his leg.

"I think what happened is he came around a corner and rammed a rock with his leg, and it really hurt him," Whitfield noted.

Rescuers struggled to locate the pair at first.

"We couldn't find them, so we started bracketing ourselves and working our way up the river," Whitfield said.

After being unable to find the pair, the crew...