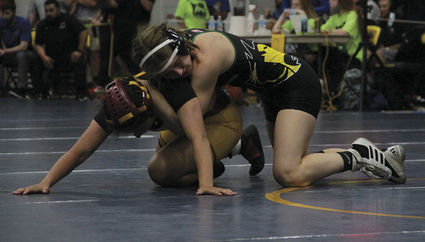 JESSY HART breaks down Hannah Hernandez of Ontario in the 130-pound division.

Sweet Home's girls kicked off what Coach Steve Thorpe described as a "wild weekend" for the wrestling team by scoring a second-place finish in the state tournament Thursday, June 24, at Cottage Grove.

Team-wise, the girls finished second behind defending state champion Thurston in a field of 23 schools representing all divisions.

"We walked away behind Thurston with a second-place trophy, our girls' first team trophy in the history of Sweet Home," Thorpe said.

Junior Paige Chafin said, "I think it was really great how we placed second, with only four girls, behind a team that had 21 at...