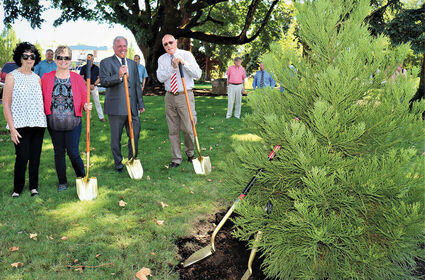 AT A TREE PLANTING in late County Commissioner John Lindsey's honor are, from left, his widow, Linda, and County Comissioners Sherrie Sprenger, Roger Nyquist and Will Tucker.

Former Linn County Commissioner John Lindsey was an outspoken advocate for his family, the citizens of Linn County and small business owners, fellow elected officials, coworkers and family members said Tuesday morning, July 6, as a redwood tree was planted in his honor on the courthouse lawn.

It would have been Lindsey's 55th birthday, 22 of those years spent as a county commissioner. Lindsey died March 9 after a year-long battle with cancer.

"John had lots to say and he said it," Board Chair Roger Nyquist said.

Nyquist said that shortly after being elected to office in November 1998, th...