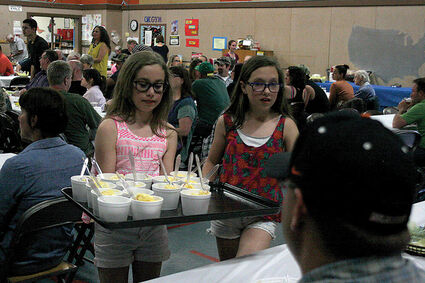 BACK IN THE DAY, volunteers Phoebe Links, left, and Hailey Lane, then both 11, pass out desserts at a fund-raising event, which drew more than 100 people. in 2015.

After more than a year of COVID restrictions, including an eight-month shutdown, how is Little Promises Children's Program doing?

It's been difficult, said Erik Duncan, chairman of the board, a year of uncertainty.

Little Promises has been one of, if not the, primary provider of child care, especially for preschool children, in Sweet Home since its founding in 1982 by Anita Hutchins, who led the organization until 2013, when she turned it over to new Director Nelia Taraski.

There have been financial challenges, due to vastly decreased income from tuition – partly due to that shutdown,...