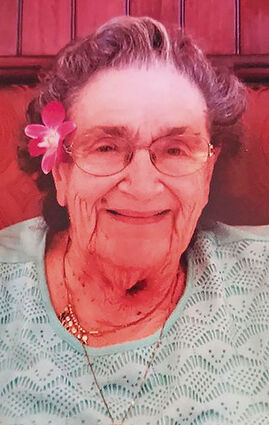 Linea Byrdene Brown, 90, passed away at the annual family campout, doing what she loved.

She was born Feb. 16, 1931, in Lebanon to Albin and Muriel (Rhinehart) Nothiger, the third of five children.

She grew up in Sweet Home and graduated with the Class of 1949. At 10 years old her chores included making the family dinner. This led to a love of cooking and baking.

She described herself as a lifelong homemaker, and she excelled at her calling. She stayed home raising her family until circumstances required her to join the work force.

She of course, chose food services. She started her career waitressing, but soon joined the staff at the Cedar Shack, a family restaurant in Sweet Home. She purchased the Harrisburg Café in 1972 and moved her family to Harrisburg.

Byrdene’s face is remembered, in the window of the kitchen, putting out dishes of delicious food. She operated the café until 1982 when she began working in food service for the Marriott Corporation on the Hewlett Packard site in Corvallis. She worked there until she retired in June of 1996.

After retirement Byrdene still enjoyed baking pies and bread at The Vault restaurant in Harrisburg.

She enjoyed attending Harrisburg Eagle sporting events and would provide snacks for the away games of her grandchildren, and for away basketball games when her son Kevin was coaching.

She was famous for her snacks, especially the homemade brownies, and at Christmastime her popcorn balls for the family and neighbors. It gave her great pleasure preparing food to give to family, friends and sports teams.

She also enjoyed playing bingo with her friends. When they all preceded her in death, she really missed it. She especially enjoyed going to the casinos with her grandkids and she could show them how it was done, usually winning the most money.

Since she lived down by the river in Harrisburg, it was the perfect spot to hold a Fourth of July celebration, and she started that tradition many years ago. It was special this year when she was selected to be the grand marshal and many people stopped by her house to visit with her.

She was honored to represent the town of Harrisburg and had a special day getting to visit with many people she had not seen in a while. As she finished her interview for grand marshal, she said, “It’s been wonderful to live in a quiet town with friends and family members.”

In lieu of flowers, donations can be made to the Arthritis Foundation at arthritis.org.