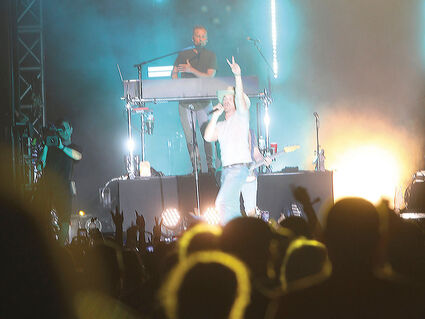 HEADLINER Dustin Lynch thrills the Oregon Jamboree audience during the waning hours of Saturday, July 31. Overall, the three-day staple, in its first installment since last year's coronavirus outbreak, played to 12,000 fans on Friday, July 30, and Saturday, July 31, then topped off at 8,000 spectators Sunday, Aug. 1.

The 28th Oregon Jamboree finished with a bang Sunday as 20-year-old sensation Laine Hardy stepped in to headline the day's program after Ashley McBryde was unable to show.

The festival, which didn't officially get the green light, publicly, anyway, until April, was blessed with some "really good" weather Friday and Saturday, with mild temperatures and a light cloud cover, that resulted in "some amazing sunsets," Director Robert Shamek said.

He said things went well, for the most part.

The show featured a full lineup of headliners Billy Currington on Friday and Dustin Lynch on Saturday, w...