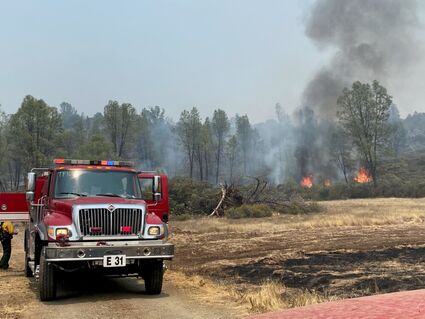 Provided by the Lebanon Fire District

Crews work during the LNU Lightning complex fires in Northern California in 2020.

The on-scene crews include three members and a Type 3 engine apiece from the Lebanon and Tangent departments; two firefighters, two communication specialists and a Type 6 brush engine from Sweet Home; and three firefighters and a water tender from Harrisburg. Albany Fire Department fire marshal Lora Ratcliff said Monday afternoon that the Albany department sent deputy chief Kyle Romey, public information officer Sandy Roberts and lieutenant Levi Lindsey, as well as "one of our Suburbans with a trailer."

The largest of the fires are the 5,020-acre Gales, 786-acre Kwis and the 359-acre Ninemile. The overall conflagration is currently 2% contained, according to information provided by Inciweb at press time. The incident was first detected at around 2 p.m. Thursday, July 29.

"The Oregon Department of Forestry has announced that current fire danger levels are extreme," a Lebanon Fire District said in a press release issued Tuesday. ODF restrictions can be found at https://gisapps.odf.oregon.gov/firerestrictions/PFR.html.