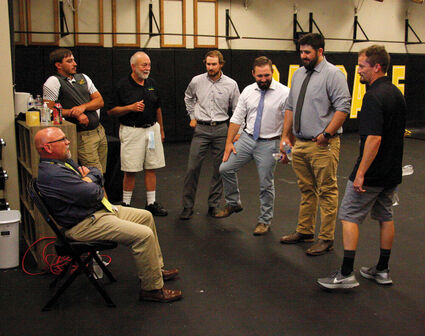 SWEET HOME'S coaching staff chats before the state wrestling finals. From left are Steve Thorpe, Brock Crocker, Tim Boatwright, Colton Schilling, Tomas Rosa, Nathan Whitfield and Clint Sieminski. The group was named the 4A Division Coaching Staff of the Year by the OWA.

Sweet Home Coach Steve Thorpe has been named National Coach of the Year for boys wrestling by the National Wrestling Coaches Association.

The announcement, made July 30, marked the first time a Sweet Home coach has received the honor. Thorpe was named the Section 8 Coach of the Year, for eight western states, in 1999 by the organization, but this is the first time he's won the national award.