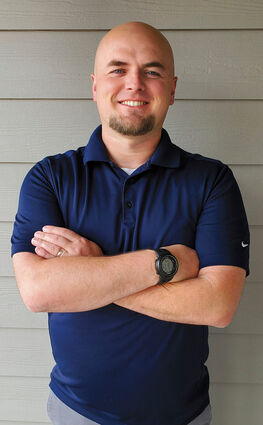 The new administrator began working in the building on Monday, Aug. 2.

Huff, 38, grew up in Coos Bay and graduated from Marshfield High School in 2001. He then received his associate's degree from Southwestern Oregon Community College, finishing in 2005. He served a two-year mission for the Church of Jesus Christ of Latter-Day Saints in Chile between the first and second year of his associate's, and would teach high school Spanish after the experience.

"I always told my students that if you ever want to learn a language, go there. Immerse yourself in it," he said.

After finishing his associate's, Huff attended Brigham Young University - Idaho, where he majored in Spanish education, graduating in 2009.

His first job was in Prescott Valley, Ariz., where he taught high school Spanish in the Humboldt Unified School District for four years.

"Funding there isn't great, so they're very quick to take new teachers," he said. "I loved it there. It was a great start to education. I had huge classes and good people to work with."

Huff and his wife then moved to Rock Springs, Wyo., following better financial prospects in the area. There he taught high school Spanish for six years while earning a master's degree in Educational Leadership at the University of Wyoming, completing his courses in 2018.

Wanting to shift into administration, Huff became principal at Filer High School in Filer, Idaho, for one year.

"We liked it, but we never got the feel that this was where we wanted to set up shop," he said of the city. "Being from Oregon, I was always kind of keeping my eye on opportunities at home."

One of the things that attracted him to Sweet Home was the chance to work under Principal Ralph Brown.

"He's got a lot of years in the game," Huff said, "so I thought it would be great to work with him as a mentor and someone who can show me the ropes."

Huff said of Sweet Home, "You're close to everything, but just enough off the beaten path that for the most part people leave you alone. Idaho was good, but we just didn't really get the home feel."

Now, living in Oregon with his wife, Rachelle, and three children, Melanie, Naomi and Eithan,, Huff said it's "wonderful" to have family close by.

He admits that it won't always be smooth sailing at the high school.

"There will be challenges this upcoming school year," he said. "But the one thing I've learned in having so many friends and family still in Oregon is that this whole COVID process has really created some resiliency. With not just education, but also with families and students. We're going to rely on that resiliency to keep going forward."

"You know there's going to be more change," he said, referring to state mandates and the pandemic in general. "So we're piecing together the playbook, hoping to cover whatever comes at us."

Huff talked about transitioning from teacher to administrator.

"Most people who get into administration, the biggest hesitation they have is they think, 'Man, do I really want to do that?'," Huff said. "Because the reason why I got into teaching in the first place was kids."

He said he wondered if administration would take all of the fun out of the job, but he decided to give it a try.

"I've seen people do it where they are still very connected and building those great relationships," he said. "If done right - and I've seen Ralph do it right - I can still have the satisfaction of meeting the kids, learning who they are, and helping them get to the next step."

He compared teaching and administration with a dancing analogy: "The teachers, the students, all of it, it's all on the dance floor. In administration, you come up to the balcony view, and you're trying to look at the whole picture."

When he comes to work every day, Huff said, "I hope to add to the positive outlook. We're bringing back kids that now have all of their own stories on how they've handled COVID and the past couple of years, and I'm just absolutely happy to have them back.

"Let's have fun," he continued. "Let's make education fun again. And in doing so, let's get the community excited about it too."

You can see Huff's positive outlook, even when it's concealed by a face covering. "What's unfortunate is that I always have a smile on my face, and it's really hard to show with a mask on. But that's OK. I just squint a lot."

Speaking on his philosophy for the new job, Huff said, "If the kids feel welcome at school, and they feel like this is a good place to be, then I feel like I can leave this place every day with my head up."