Residents speak out on mask rules at town hall 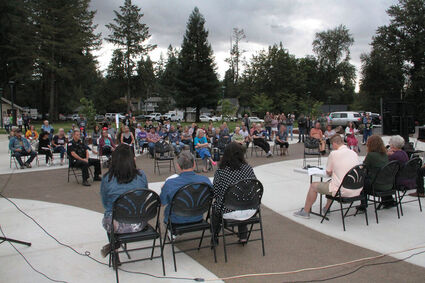 Citizens gather Wednesday, Aug. 11, at Sankey Park to discuss the mask mandate at a town hall held by the Sweet Home City Council.

The governor had announced Aug. 11 that protective face coverings were again required in indoor public spaces beginning that Friday, due to a statewide surge in COVID-19-related cases and hospitalizations. She said the mandate would be in effect for the foreseeable future and did not provide a timeline for when it might be rolled back.

"We recognize that this is a difficult time for everyone. We recognize and we understand your frustrations," said Gerson. "We are here to listen as a council, not to speak."

"Quite frankly, regarding the mask mandate, the city's done nothing," Towry said. "We've really been trying to fly under the radar as much as possible. The City of Sweet Home has not enforced the mask mandate in any way, shape or form."

He added that a city statement more than a year ago noted that mandates would not be enforced.

Towry explained that Sweet Home has been cautious in its stance because of a $7 million allotment in the governor's 2021-23 budget for a wastewater treatment plant improvement project, one of 30 Oregon Lottery bonds projects slated throughout the state.

"That's $7 million that we don't have to pay for in this $30-million-plus project," Towry said. "The governor can withhold your funding at any time. If she were to do that, every water account in the city of Sweet Home would be responsible for an additional $2,500."

Speaking for the Sweet Home Police Department, Police Chief Jeff Lynn said, "We're not the 'mask police.' We're not going to enforce the mask rules, guidelines or suggestions. I think that's much more of a local, personal decision for each community member."

"What I want to stress to everybody is to respect those businesses that are making decisions they feel are best for their business," he added. "The only time we'll get involved with any kind of potential mask dispute is if it's associated with a business, when that business is asking a patron to either wear a mask or leave.

"In the end, it is their right to have whomever they want on their property. A lot of these businesses have to make difficult decisions, because there are other state agencies that can levy some fines, fees, or whatever you may call it. Each business owner has to weigh the risks versus the rewards. If you choose not to wear a mask and you're asked to either put one on or vacate, it's best to either put one on or vacate."

At one point, Sweet Home resident Theo White asked the councilors pointedly, "Do you support forcing masks on our children at our public schools?" White was one of 14 residents to address council members during the town hall. (A total of 16 from other cities also posed questions.)

Coleman and Richards indicated that they did not.

"I support whatever is in the best interest of the children," Gerson said.

I don't believe in forcing people to do things, but - " Gourley said before being cut off.

"I'm not wearing a mask for a reason," Trask responded.

Manuel Grajeda of Sweet Home spoke of his decision not to enroll his daughter in the Sweet Home School District this past year because of mask mandates.

"My wife and I decided to not have our daughter attend school, and that was our choice," he said. "She wanted to. It broke her heart. She completed her freshman year in homeschooling, and she's never going to get that back.

"If this continues, we are probably not going to register our daughter," he added. "We'll find some other type of alternative teaching."

Resident Veronica Ellis advocated for the freedom to choose, a sentiment echoed by others.

"We are being forced against our will to do something that we don't want," she said. "We live in America, and we have freedom of choice that is being taken away from us. The more we give, the more they take."

"I think it should be a choice," she said. "If you want to wear a mask, wear a mask. If you don't, don't. But it shouldn't be forced on anyone, especially the children."

"We have to have a policy. Because the governor is not getting any nicer to us," resident Nancy Patton said. "She's forcing people to get vaccinated, to the point where you might not be able to go into a restaurant to eat if you are not. This is asinine. We cannot live like this."

"Keep in mind that when you go into a small business, you're angry about your right, but they (small business owners) have something that they have at risk as well. And it's everything that they've put into their life. You're threatening their freedom."

During Brown's August 11 press conference, Oregon Health Authority Director Pat Allen noted that the state experienced a 373% increase in the number of COVID-19-related hospitalizations over the prior six weeks, from 134 patients on July 1 to 635 hospitalizations as of Aug. 10. He also noted that younger people represented a growing percentage of those hospitalizations, and reported that the Delta variant was making people sicker, longer.

"The harsh reality is that Delta is a different virus," Brown said. "It's changed everything."

State Health Officer Dr. Dean Sidelinger said Aug. 11 that the pandemic has reached a "dire stage" where daily infections and hospitalizations are threatening to overrun hospitals in the coming weeks. Local health authorities have echoed that. 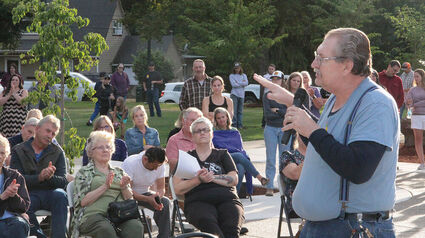 Rick Mace, of Sweet Home, poses a question during the town hall.

"The COVID-19 vaccine is saving lives," Sidelinger said. "We can bring this surge under control by vaccinating as many people as possible.Data in Oregon reaffirms what science has long supported – just how incredibly effective all three of the available vaccines are in preventing severe COVID-19 infection."