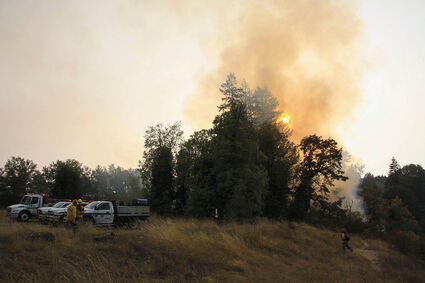 Personnel from the Oregon Department of Forestry and Sweet Home Fire and Ambulance District move in on a fire that ignited just west of Pleasant Valley Bridge Friday evening, Sept. 3.

A fire, which investigators suspect may have started in a transient camp, burned nearly half an acre on the bluff between the railroad tracks and the South Santiam River, just west of the White's Park Friday evening.

Personnel from Sweet Home Fire and Ambulance and the Oregon Department of Forestry responded just after 6 p.m. Friday, Sept. 3, to find heavy brush burning west of the park.

SHFAD Battalion Chief Eli Harris said he could see the smoke as he left the fire station and called a first alarm to get trucks rolling.

He said he encountered three men coming out of the brush when he a...