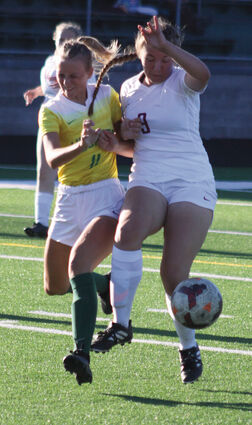 Chloe Fairchild, left, battles Junction City's Ashlynn Long for the ball during Sweet Home's 2-1 win over the Tigers at home.

In their first week of gameplay, Sweet Home Girls soccer bested Junction City at home 2-1, before falling to Klamath Union 4-0 on the road.

Head Coach Ramiro Santana said Sweet Home and Junction City were "kind of rivals in the past," as the two teams used to be in the same league.

"We still have the rivalry," he said. "We always have fun playing against them, and they feel the same way."

He said the first game of the season was a "learning experience."

"We don't have a lot of experienced players in there, but we competed against them pretty well," he said.