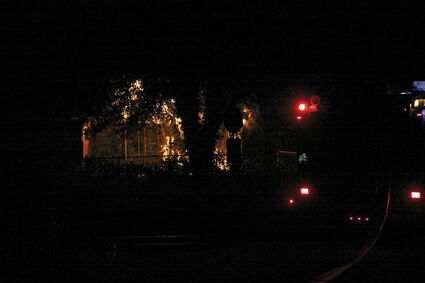 Flames show from a burning house off Nandina Street, to which firefighters responded early Wednesday, Sept. 8.

Sweet Home firefighters responded at 3:25 a.m. to a report of the blaze, at 1400 Nandina St., across the railroad tracks just northwest of the Safeway shopping center.

Fire Chief Dave Barringer said it took about 35 minutes to get the fire under control and crews stayed until about 8 a.m., mopping up and trying to cut their way into the attic to look for hot spots.

The building had a "Condemned" sign on one wall and Barringer said there was evidence of "recent inhabitants" who were not present when firefighters arrived. It appeared they had been squatting, he said.

"It had not been occupied, officially," he said.

The fire appeared to have started at an electrical box, to which a wire ran from a nearby pole.

"It didn't look like it was secured correctly," Barringer said, adding that it appeared the line had been "arcing and sparking."

No damage estimate was available and the owner's name was also not listed.

Two SHFAD engines and a truck responded, along with 10 firefighters. Also responding were a truck and two firefighters from Lebanon and another with four from Brownsville.