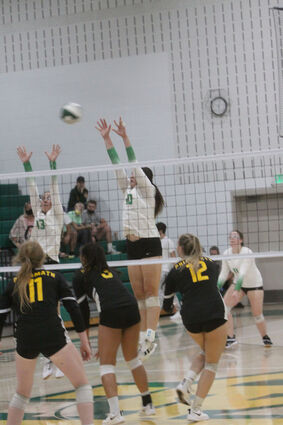 Huskies Adaira Sleutel,10, and Kailee Pepple go up to block a Philomath hit during their win over the Warriors.

Sweet Home's volleyball players found out what it takes to be a top team in a week that saw them sweep a tough conference foe, then battle through some tough tournament play, where they lost to two of the state's top teams.

With their student section in full voice, for the first time in nearly two years, Sweet Home played what Coach Mary Hutchins said was some players' "best" effort of the young season.