When there's smoke, send in the drones

Eye in the sky can prove invaluable to local forestry, fire- fighting agencies 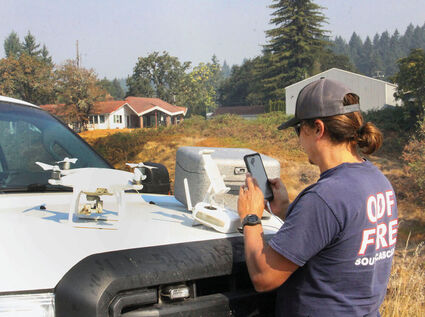 Craig Wilson checks his cellphone before launching his drone, left, to scout the scene of a brush fire that he suspects has re-ignited.

It's early on a Saturday morning and someone's reported smoke emanating from the site of a fire local agencies had responded to the previous evening, Sept. 3, on a bluff overlooking the South Santiam River and Pleasant Valley Bridge.

Craig Wilson, who's been a summer firefighter with the Oregon Department of Forestry for 23 years, arrives on the scene. But instead of grabbing hand tools and beating his way through the thick underbrush to check out what's happening a few hundred feet away, Wilson opens a plastic case and extracts a drone.

It's his, and he's been using it to scout fires since...