Wet weather aside, Best in the West delivers crowd of triathletes 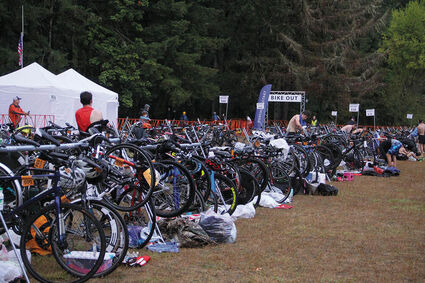 Competitors transition from the swim to the bike leg of the race in the transition area.

After a year's hiatus, officially, at least, the Best in the West Triathlon Series returned to Sweet Home last weekend, and while the numbers weren't record-breaking, it was a good turnout, Director Blair Bronson said.

"This is the first year we haven't increased our participation from the year prior," he said, noting that he wasn't counting last year, which wasn't an official event, in that calculation.

But he said things worked out well, considering that heavy rain was forecast and athletes are returning to competition after, for some layoffs of up to two years.