Boys fall in soccer to Sisters, No. 1 Stayton 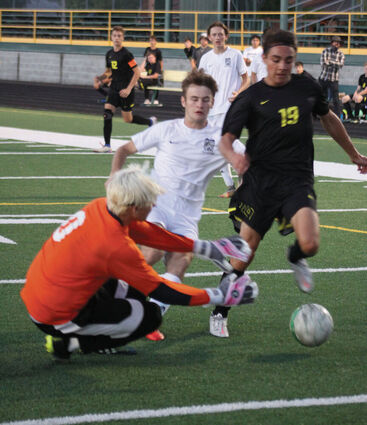 Sweet Home boys soccer lost two league matches this week, falling to 2-5 on the season. Sisters beat the Huskies 5-1 at Husky Field, and Stayton handled the Huskies 8-0 on their home turf.

Sisters scored two goals in the last two minutes before halftime to go up 2-0, a result of what Stutzer called "defensive substitutions and miscommunications." Max Klumph answered with a goal for the Huskies early in the second half on what Stutzer called a "really nice shot from outside," but then Sisters answered with two more goals of their own, also in a two minute span.

This time, the error was a defender coming out of position on the first goal, and "four guys near the sideline instead of where they should have been" during Sister's next goal. The Outlaws then tacked on one more goal near the end of the game to win 5-1.

Stutzer cited "mistakes in conditioning and mental focus" during the game.

Two days later, Stayton, the No. 1-ranked team in 4A, hit Sweet Home hard, putting the mercy rule into effect with an eight goal differential.

He noted that his team stuck around in the game before the mercy rule came into effect longer than the program had in the past against Stayton.

"We didn't go out before halftime," he said.

Stutzer noted that freshman Jack Simmons had an impressive game coming off the bench to play defense, a position he hadn't played before.

Looking ahead, Stutzer said "We've got a lot of things to improve on."

"We played two strong teams there," he continued. "They definitely figured out how to exploit our weaknesses."

The Huskies had numerous players out against Stayton. Cooper McKinnon was injured in the game, William Hawken did not play, Ben Tolman didn't travel with the team, Chris Christman was injured around the middle of the contest, and Greg Farrell went down with an injury five minutes into the game.

The Huskies go on the road this week, squaring off against Newport at 6 p.m. on Thursday, Sept. 30.

"It will be interesting to see what happens," Stutzer said of Thursday's game.

"I don't think they are the Newport of old, taking state championships, but we will have to play sound defensively, put offensive pressure on them and capitalize on opportunities."