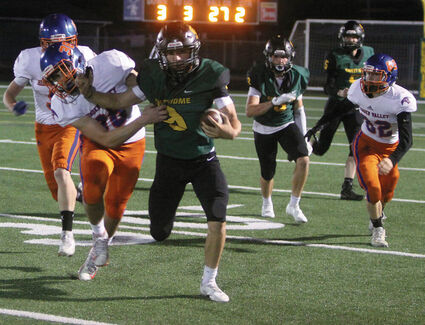 Friday night's score wasn't as lopsided as the Huskies' loss to Hidden Valley last season, but some spark on both sides of the ball in the second half wasn't enough to best the Mustangs, who prevailed 36-16 in Sweet Home on Sept. 24.

Hidden Valley improves to 2-1 on the year, despite being without starting quarterback Nate Vidlak, who was injured in the Sept. 17 Banks contest.

The first half was all Mustangs, as Sweet Home's defense proved ineffective against a steady diet of runs from junior running back Daniel Iwamizu, who often lined up in the backfield alongside Noah Stone, switching of...